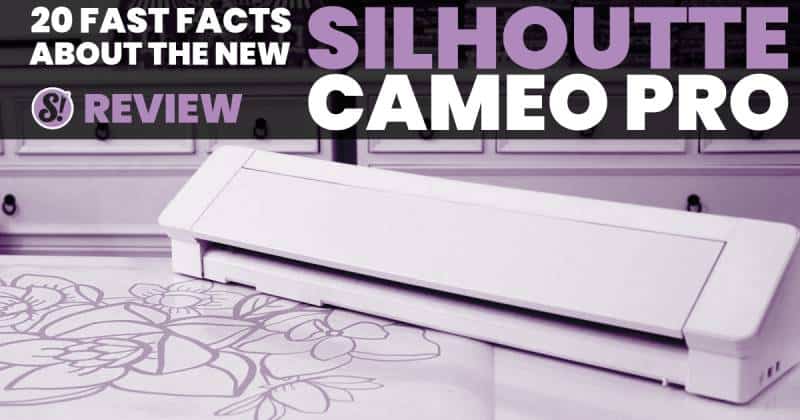 You may have missed the announcement this week, but Silhouette has released its new and highly anticipated wide-format cutter: the Cameo Pro! Orders from Silhouette are shipping now, so we’ve compiled a factsheet to give you all the information you need about this hotly anticipated cutting machine.

How wide is the Cameo Pro?

When Silhouette first announced their new wide format cutter (back in May 2019), the Pro was slated to be 20 inches wide, but in the course of development, Silhouette changed their plans and released an even wider format cutting machine.

What are the cutting dimensions of the Cameo Pro?

The new Cameo Pro will cut 24 x 24 inches on a cutting mat (standard grip mat included with purchase) and up to 24 inches by 60 feet when cutting lined media from a roll. Materials like adhesive vinyl, HTV and sticker sheets can be fed directly into the Cameo Pro without a mat because of the backing liner present on those materials.

How much does the Cameo Pro cost?

The suggested retail price of the new Cameo Pro is $499.99. This puts it in the mid range of 24 inch vinyl cutters for the home, small business and professional market.

Where can I buy a Cameo Pro?

The Silhouette Cameo Pro is available for purchase at the following outlets:

When will the Cameo Pro ship?

Units seems to be selling quickly at Silhouette USA in the first week of release. Silhouette and Michaels should be shipping whatever units they have in stock without delay (Silhouette reports shipping will take 2-4 days after the order is placed), but orders made through Swing Design will ship at the end of November or beginning of December 2020. Orders made through Heat Press Nation are expected to ship in January 2021.

Will it do matless cutting?

Yes! Like all Cameo machines, the Pro will cut rolls of vinyl up to 24 inches wide and make cuts up to 60 feet long. As long as the material being cut has a backing liner (like adhesive vinyl, HTV, or printed vinyl/sticker sheets), the Cameo Pro can cut it without a mat.

This also applies to paper and cardstock: thanks to the channel under the cutting blade, the Cameo Pro can perform Pop-out cutting, making a perforation cut around your design so you can pop it out after the cut is finished.

Is the roll feeder included?

Absolutely! Unlike the Cameo 4 and Cameo Plus, the roll feeder for the Cameo Pro is an external roll feeder, not an integrated roll feeder (ie, not part of the machine itself).

The Cameo Pro roll feeder comes in three separate pieces that hook under the front lip of the machine. Width can be adjusted by sliding the right roller support side to side, and you can adjust the support wheel to accommodate different roll diameter sizes.

Does the Cameo Pro work with Mac?

Yes! The Cameo Pro works with Silhouette Studio design software and there is a version for MacOS. In our opinion, this is a very important feature of the Cameo Pro, because it is the only 24 inch cutter that is Mac-compatible for under $750.

If you are designing in a professional environment on a Mac and need tools for large format or high quantity cutting jobs, it can be difficult to find a cutter that doesn’t break your budget. Here’s how the Cameo Pro compares with other 24 inch cutting machines when it comes to price and compatibility with MacOS.

Does the Cameo Pro work with iPhone/iPad/smartphone/tablets?

The Cameo Pro does not work with any mobile devices.  Silhouette Studio software only works on desktop or laptop computers, and therefore you need an actual computer to operate your Silhouette Cameo machine. There was a Silhouette Studio mobile app that was dropped in early 2019 and is no longer updated or supported by Silhouette.

What software does it use?

For more detailed information on the different versions of Silhouette Studio, read our breakdown review here.

Is the Cameo Pro wireless?

The Cameo Pro does have wireless Bluetooth connectivity so you can connect your computer to the cutter via wifi connection.

What mats does the Cameo Pro use?

Other mats available for the Cameo Pro:

The Cameo Pro setup for cutting mats differs from the Cameo 4 and Cameo Plus. Included with the Pro is a mat support platform that hooks under the front edge of the machine between the two roller supports. This support platform keeps the mat from sagging or slipping during operation.

The Cameo Pro can also use 9, 12 and 15 inch mats from the Portrait, Cameo 4 or Cameo Plus machines.

What are the dimensions of the Cameo Pro?

How much does the Cameo Pro weigh?

What tools work with the Cameo Pro?

The Cameo Pro works with the same toolset as the Cameo 4 and Cameo Plus. Included with purchase is the Autoblade (type B) for cutting vinyl, paper and cardstock. Also available for purchase for the Cameo Pro:

You can also use the tool adapter set to use older Silhouette tools with the Cameo Pro. These adapters work with the ratchet blade, deep cut blade, premium blade and 2mm Kraft blade.

Does the Cameo Pro do Print and Cut?

Yes! The Cameo Pro is able to do the same print and cut functions as other Silhouette cutters. Print and cut settings are made in Silhouette Studio, and in the software, you can size your projects all the way up to the full size of your media. If you have a wide format printer, you can do large images or many small images (like gift tags) using pop out cutting settings for paper.

What is the cutting force of the Cameo Pro?

The Cameo Pro has the same downward cutting force as the Cameo 4 and Cameo Plus.

What kind of vinyl works with the Cameo Pro?

The Cameo Pro can cut any type of vinyl you might consider for your crafting or commercial projects, including permanent or removable adhesive vinyl for signs, décor, glassware, auto decals, or stickers. You can also cut heat transfer vinyl for apparel in any finish you want

Silhouette does not offer any 24 inch rolls of vinyl to go with the Cameo Pro, but there are plenty of places to find high quality vinyl at low prices. One thing to note about vinyl for wide format cutters is that adhesive vinyl (permanent and removable) can be found in 24 inch rolls, but heat transfer vinyl is mostly limited to 20 inch rolls.

What’s Included with the Cameo Pro?

If you’ve been waiting for the release of the Cameo Pro, then the eagle has finally landed. Wider than expected, you can now cut up to 24 inches wide with the same great tools that makes the Silhouette Cameo 4 a best seller.

The Cameo Pro is a great investment for crafters looking to level up their game to start home businesses, or for small businesses looking for MacOS compatible tools without breaking the budget.

If you are still undecided about which craft-cutting machine is best for you, check out our comprehensive resources here: